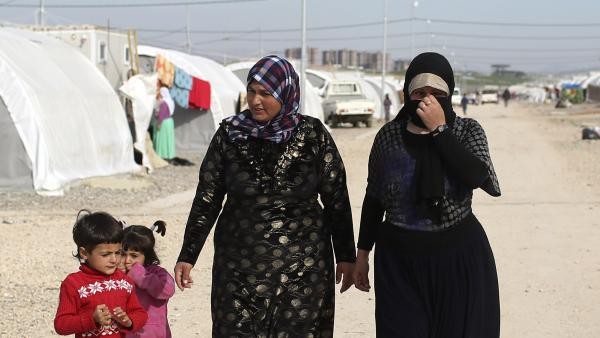 One of the most extreme cases of violence against women in recent years has been the treatment of jihadists in the Islamic State group against Yezidi women and girls in Iraqi Kurdistan. A French NGO helps them to restore hope.
When the city of Sinjar falled into the hands of the Islamic State group on 4th August 2014, thousands of Yezidis were killed, tortured and enslaved. Women captured are used and sold as sex slaves. According to Amnesty International, “some 3,800 women and children are still in captivity in the hands of the IA”.

Others have taken the road to exile and are being moved to refugee camps. NGOs and associations are raising the alarm and multiplying actions to help them. Among them, the NGO Action for Women and Assistance to Minorities in the Middle East (AFAM).

AFAM’s goal is to help these women, Yezidi and Eastern Christians, who have been plagued by the atrocities they have experienced, to rebuild their lives and lead a decent life. These survivors live mostly in refugee camps in Iraqi Kurdistan. The NGO has visited them several times. They were asked to help by these women, who wish to remain on their territory and consider that this war is not theirs. AFAM plans to offer them a “Village of Hope”.

l’AFAM obtained from the regional government of Iraqi Kurdistan (KRG) a 5,000 sqm plot of land to install 100 prefabricated houses and to install 460 orphaned children who will be accompanied by 100 women, “adoptive mothers”. This “village of hope” will be equipped with a kitchen, a nursery and a dispensary.

Several workshops are already in place: carpentry, sewing, IT, tapestry … to launch economic activities. The ultimate goal is to recreate a social structure based on the skills of all.

AFAM organized a press conference on 17th November 2016 at the Palais du Luxembourg in Paris, in the presence of, among others, Senator LR of la Vendée Bruno Retailleau,  Shirin Azadpour, the President of l‘AFAM and the president of the NGO Innocence in Danger, Homayra Sellier, who on behalf of her organization supports the work of l’AFAM.

As today’s children will be the parents of tomorrow, education is also at the heart of l’AFAM’s action and among the subjects taught, learning French plays a strong role in camp schools.

In the presentation of his project,  l’AFAM presented an estimare of one and a half million euros to allow these women and children to stay in their country and not to look for exile in Europe or elsewhere.

The NGO is supported by volunteers, partners, specialists and patrons. And it is committed to recruiting staff, trainers and workers, among the refugees and displaced so that every person can work, feel useful and live in peace. Because “Kurdish women wear the same values ​​and dreams as women elsewhere,” as Miss Kurdistan 2016 said at the same press conference.