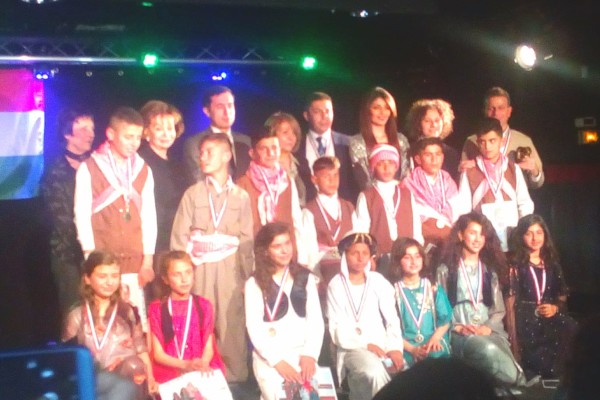 Yezidi children must be rehabilitated, returned to Shingal: NGO

PARIS, France – Yezidi families torn apart by the Islamic State (ISIS) in 2014 must be rehabilitated and returned to their homeland of Shingal, a charity chief providing aid to the displaced minority said.

Shirin Azad Pur, head of the LAFAM Organization, was speaking at an event in the French capital this week, where 14 Yezidi children were invited to attend from Khanke displacement camp in Duhok province.

“Our main message is for people to stay in Kurdistan,” Azad Pur told Rudaw.

“To whom should they abandon their land? They all have to return and settle in Shingal. We are doing our utmost to help their women and children.

The 14 boys and girls had lost one or both of their parents and witnessed some of the worst atrocities committed by the jihadist group when it rampaged across northern Iraq in the summer of 2014.

The event, organized in aid of the children’s rehabilitation, was attended by non-governmental organizations, the Kurdistan Regional Government (KRG) representative to Paris, and French politicians.

Jacky Deromedi, a French senator, said her country wants to train displaced Yezidis so they can rebuild their lives in Shingal.

“The idea is to be able to get these people into Europe, have them trained, and then go back to their countries to be able to train other people,” she told Rudaw.

Ali Dolamari, the KRG representative in Paris, thanked France for its continued support of Yezidi and Christian IDPs sheltering in the Kurdistan Region.

“[France] is currently aiding two camps in the Kurdistan Region. They are planning to supply assistance to another camp in a bid to lift some of the burden on the KRG,” Dolamari told Rudaw.

“They plan to carry out some crucial projects in the future in the Kurdistan Region. One of the camps they assist is in Bardarash and the other in Duhok. There are also many other non-governmental French organizations operating at Duhok and Erbil camps.”

Thousands of Yezidi women and children are still unaccounted for after their abduction by jihadist militants almost five years ago.

With instability, destroyed infrastructure, and a lack of basic public services, many displaced Yezidis choose to remain in the IDP camps of Duhok or move abroad rather than return to Shingal.

With reporting from Paris by Zinar Sino